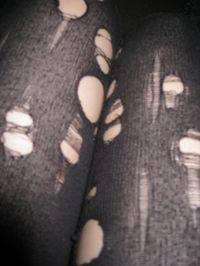 Ah…the wonders of visual merchandising aka shop display… whoever had the wonderful idea of customising the tights on the shop dummies in the womenswear department of Selfridges in Manchester is a clever one seeing as I was transfixed by the mannequin and spent a good five minutes studying it intently, during which I might have also picked up what the mannequin was also wearing and promptly went to seek it out. 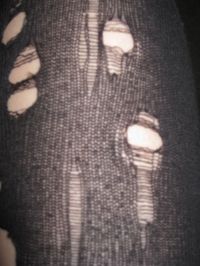 Except, for me, the fascination ended at the tights, the way they had managed to cut up a pair of black tights so expertly so that they achieved a ‘web’ effect, with the strands of yarn/thread in the tights making a wonderful distressed effect, similar to the tights seen at Rodarte AW08-9 but with more opaque parts of the tight interspersed between the ‘web’ sections.  Hard to explain and it does make it even harder to demonstrate visually when my own botched attempts with a pair of black cotton tights didn’t really pan out with the right effects.  Cutting little slits in the tights made quite substantial strongly round holes in the tights and then it was a case of getting a pair of closed scissors and swiping the tights in a downward motion with the point of the scissors until a ladder appeared.  Of course, I had to do all of this tights-jabbing whilst I was wearing the tights so I’ve also got a bit of a gash on my calf to add to my myriad of mosquito bite bruises etc.  Oh well… deliberate holey tights it is then… better luck next time… or better yet, Rodarte tights anywhere? 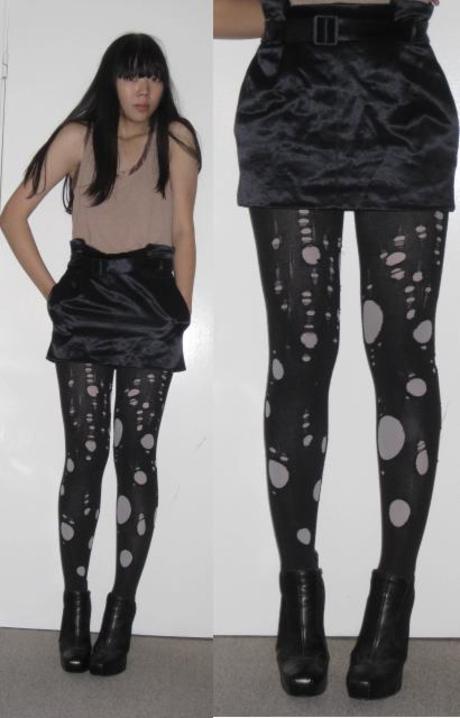